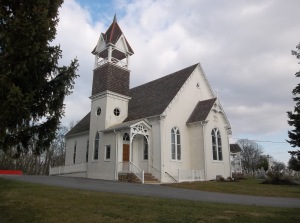 This is the fourth installment of Jerome’s story. What will happen before the end? not just the end..THE END?  If you’ve missed the adventure you can catch up here.

Oliver is the girl who sleeps behind the organ at the church. I have hidden her there these last two months. The world  went dark in January. It went mad in May. I keep thinking of My daughter’s last words to me.

“You said in times of trouble it’s  the minister’s job to release the blessing and the peace of God over a community.”

Oh how I have failed my community. How I have failed my God. I have preached myself to exhaustion but no one has listened. Those I thought true believers have been unmasked. The leopard’s have shown there spots of hopelessness raking their claws of self-preservation through the fabric of society. The town is in shreds and this little white church and its rag-tag remnant is all that’s left of the island of decency and even that is hidden beneath the veneer of  gunpowder and lead.

It was towards the end of March that I made my first trip into Sandy Hollow to find the Bone Brothers. The gang of wild boys had been attacking our town for over a month and a war between them and Tyson’s men in blue was imminent. I couldn’t sit back and just watch grown men kill little boys anymore. So I left mother, Anna and our precious spring gardens in the care of Silhouette. I traipsed with nothing more than my Bible and a bag of food into the Hollow.

My Grandfather used to take the cousins fishing in the backwoods to the North and West of Winchendon. Then it was hundreds of square miles of swampy marsh and forest crisscrossed by dirt roads and cart paths carved out of the woods during the Revolutionary War. Buried here and there in the enormous watery wilderness was the occasional  homestead or dairy farm. Otherwise it had been a deserted land perfect for hunters and anglers, frequented by both.  The years had seen some development of the Hollow. Tarred roads had replaced some of the dirt tracks  but miles of ancient wilderness still gave the Bone Brothers ample places to hide far from the prying eyes and killing guns of Tyson’s men.

It took me most of the day to walk to my Granddad’s fishing hole. I prayed along the way that God would grant me favor and let me run into the renegade troupe. I knew in the natural my chances were slim but faith told me I didn’t need chance.

I stood over the half-frozen waterway near the intersection of two of the oldest cart roads. I remembered Grandad stringing my pole. I could see him pushing the helpless worm on the hook and casting my line into one of the deep pools on the opposite bank.

“What now?” I asked Heaven.

I felt a sharp pain in my back. My knees buckled. My vision went white then black. Voices caked with the blood at the back of my head ran like wintry rivers through my mind. Then I awoke. My vision pulsated with the rhythm of the bleeding lump at the posterior of my skull. I leaned over and vomited on the pine-needly snow.

A fire chuckled to the left of me and lit a circle of silent dirty faces gathered to its warmth. An older teen stepped from the dark of the pine bower prison into the light. His skin was as dark as the gathering night. This was Jolly, the Bone Brother’s leader.

“I thought we should kill you but Oliver said you might do us a solid if we let you live.”

“Do you a solid? Who says that?” I felt my sarcasm rising.

“We could still kill you.” He lashed back but I could see the young black man was uncertain. Jolly was the guts of the crew but Oliver was the brains.

Maybe Jolly should have killed me. It might have ended differently had he. He didn’t. It didn’t. Now Oliver sleeps behind the organ and all my little Bone Brothers are dead, killed by Tyson and his men. I worked for over a month to convince the Brothers to come in. I Gained their confidence. I brought them food every week in a cart I pulled through the late winter snow to Grandad’s creek. They went from hitting me over the head to blindfolding me on the walk to their camp.That was Oliver’s suggestion. She paid dearly for “getting me an in”.

Oliver is one of “the girl bothers”.  She is the Wendy to Jolly’s lost boys. Maybe I’ve gone the extra mile for her because she reminded  me of Renee at that age. Her curly brown hair was always arranged in an intentionally messy bun that said “I care how I look. I just want you to think I don’t”. Unlike the men of the clan her face was always washed. Her clothes were neat. Her wit was sharp and her mind was ordered. She was sixteen. Her grandparents died after a month without food and medicine. At that point Oliver, real name Olivia, had taken to the woods. She came across Jolly and his fledgling band quite by accident but proved her worth by helping them catch their first game. When hunger and numbers made hunting implausible it was she who arranged the first raids. Her successful strategies kept her in leadership even when she opposed Jolly’s more violent offensives.

May first was the day I was followed. The daffodils were up. The way to Grandad’s creek was lined with forsythia in full bloom. Spring warmth had replaced winter chill. My cart felt light with hope and heavy with food. At the creek Oliver blindfolded me and led me to the pine bower. The Brothers had not raided in almost three weeks. I had been working with the town council on bringing the gang in peacefully. Everyone but Tyson seemed willing. The Sheriff’s blood lust had grown with his hunger for power. If only I had a few more weeks I may have been able to outmanouevre  the badge and gun. As it was I was the one on the wrong side of the Quarterback sneak.

As soon as my blindfold was off that day the gunshots started. Bone Brothers crumpled in explosions of blood. Jolly fell with a shriek on top of Marcus a twelve-year-old orphan. The gang leader’s eye oozed vitreous jelly and blood.  Tyson’s men were firing from every angle. Oliver and I were only saved because we were nearest the  river’s edge. The deputies had no approach from that angle and most of the Bone Brothers were between us and the snipers.

I dragged the girl into the swirling icy water. It was spring-swift and cold with the last of the winter melt but deep enough to hide us. She struggled.

I shook her and said “Choose to live!”

Then I took her under, baptized her into the world’s end, that place between the valley of the shadow of death and the Blessed Hope. We hid in a bass pool beneath the roots of an ancient oak. I left her there when Tyson called me out.

“When I’ve gone, go to the Parish.Hide until I come.” I pressed my church key into her hand and waded to the deadly safety of the Bone Brother’s last stand and Tyson’s waiting custody.